Town in the beautiful green of the Mountain Forest 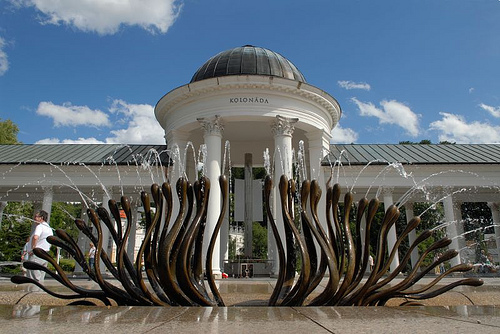 Marianske Lazne – one of the most charming spa places in Europe, splendid pearl surrounded by green forests rich in natural healing springs and one of the cultural centers of the West bohemian region. More than two centuries ago, was this area hostile, abandoned and dominated by swamps and deep forests. When we look at Mariánské Lázně and its beautiful parks, colonnades, and spa hotels nowadays, we can hardly believe this fact.

In 1779, the monastery doctor Johann Josef Nehr proved and was actively promoting the healing effects of the springs. Consequently, the first baths and spa pavilions build-ups were initiated thanks to the abbot of the Teplá monastery Karel Kašpar Reitenberger, at the beginning of the 19th century. In 1808, this small settlement was named as Mariánské Lázně.

The different chemical composition of the town’s numerous springs makes it the perfect place to treat a wide variety of ailments. The local springs containing a variety of minerals are the basic resource used in numerous spa treatments available. In the countryside around the town some 100 springs rise from the ground and within the town itself there are 40 springs.
The various mineral springs are now sheltered by pavilions and colonnades that have been built over them over the years, all of which helps create the town’s special spa ambience.

The town was once one of the top spas in Europe and hosts such characters as Goethe, Chopin, Thomas Edison, Wagner, Franz Joseph I, the Russian Czar Nicholas II and many more. At the height of its popularity in its golden age the spa town was receiving 20,000 visitors a year.

How to get from Prague to Marianske Lazne

It is rather difficult to get to Marianske Lazne from Prague by public transport and takes quite a lot of time. For those who value comfort we recommend to choose an individual transfer from|to Marianske Lazne, because this method is the most convenient!